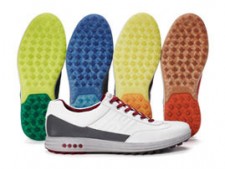 (LONDONDERRY, NH) – Danish company ECCO – a leading manufacturer of innovative footwear – announces that it has been named “Official Footwear Supplier” to The 2015 European Solheim Cup team and will create special-edition shoes exclusively for the squad’s players, Captain Carin Koch and her assistants.

For this, the fifth Solheim Cup during which ECCO has supported Team Europe, the company will also provide shoes to the defending champions’ caddies and team staff. The competition will be held 18-20 September at the St. Leon course of Golf Club St. Leon-Rot, St. Leon-Rot, Baden-Württemberg, Germany.

“The longstanding support of Team Europe and ECCO’s position among our key sponsors and suppliers have helped make The Solheim Cup one of the most compelling events in global sports,” says Ivan Khodabakhsh, CEO of the Ladies European Tour. “All the players look forward to receiving the special-edition shoes, which embody the team spirit that will help us retain the Cup.”

“ECCO is renowned for its uncompromising quality, innovative technology and Scandinavian design philosophy,” says Eicko Schulz-Hanßen, Director of Golf Club St. Leon-Rot. “We will need these values at The 2015 Solheim Cup to make sure that Team Europe is best prepared.”

A biennial, trans-Atlantic team match-play competition, the Solheim Cup features the best European members from the Ladies European Tour (LET) versus the top-ranked American players from the Ladies Professional Golf Association (LPGA) Tour. Team Europe enters the competition holding the Cup and will need 14 points to retain it, with the U.S. Team requiring 14½ points to regain the coveted Waterford Crystal prize that was first presented in 1990.

“This truly unique event has proven to be an exceptional showcase for the ECCO Golf collection and our company’s commitment to the women’s game,” says Jesper Thuen, Global Marketing Manager – ECCO Golf Lab. “With our side looking for its third-straight win, golf fans throughout Europe will be tuned in and rooting them on.”

About The Solheim Cup

The Solheim Cup combines the tradition and prestige of the game of golf with passion for one’s country. This biennial, trans-Atlantic team match-play competition features the best U.S.-born players from the Ladies Professional Golf Association (LPGA) Tour and the best European members from the Ladies European Tour (LET).

In addition to founding sponsor PING, Rolex, Allianz and SAP are Global Partners of The Solheim Cup. For more information about The Solheim Cup and updated standings for each team, log on to www.solheimcup.com.
About ECCO

More than 350 million pairs of ECCO shoes have walked the earth since 1963, when Karl Toosbuy founded the company in Denmark. ECCO is one of the few major shoe manufacturers in the world to own and manage every step of the shoemaking process – from leather production through manufacturing in its own factories and all the way to its stores. Guided by the design philosophy, “The shoe must follow the foot,” ECCO creates high-comfort, functional, stylish shoes and timeless bags, accessories, small leather goods and shoe care products. Still family owned, ECCO is headquartered in Denmark and employs more than 19,500 people of 57 nationalities worldwide. ECCO products can be found in the 1,100 ECCO stores and 14,000 other sales locations in 87 countries.

ECCO USA is based in Londonderry, New Hampshire. For more information: www.eccousa.com, 800.886.3226