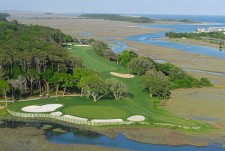 Cherry Grove, S.C. – Tidewater Golf Club announces the Surf & Turf Package, a two-round offer that features golf at a pair of the Myrtle Beach area’s most highly regarded courses for as low as $174.

The deal includes a round at Tidewater Golf Club, which has been ranked among America’s top 100 public courses, and Surf Club, a semi-private George Cobb design.

Long one of the Grand Strand’s best and most popular courses, Tidewater has reassumed its perch at or near the top of every list of Myrtle Beach’s best courses. A 2014 renovation project that included the installation of new miniverde Bermuda grass greens, the expansion of every fairway, new sand in all the bunkers and an extensive tree removal project, has enjoyed popular and critical acclaim.

Tidewater has long been regarded as one of Myrtle Beach’s most scenic layouts. The course has eight holes that play along either the Intracoastal Waterway or the marshy waters of Cherry Grove, highlighted by the par 5 13th, which offers a distant view of the Atlantic Ocean.

The par 3 third and 12th holes are arguably the best pair of one-shotters along the Grand Strand as each brings the salty waters of Cherry Grove into play. Both tee shots feature a combination of challenge and beauty that leave golfers talking long after they’ve left Myrtle Beach.

Surf Club was North Myrtle Beach’s first golf course and its timeless design continues to delight golfers. A semi-private facility, Surf Club treats everyone like a member and its combination of playability and understated charm have long made it a favorite among knowledgeable Myrtle Beach golfers.

The Surf & Turf package runs throughout 2015.