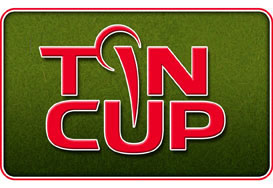 The University of Arizona – features the block “A”, allowing users to depict it in UA red and blue

University of Virginia – two stencils offered, one boasting the traditional “UVA” lettering, the other depicting the signature “V”
“Our college cups have been hot sellers online and in golf shops around the country as die-hard fans show their school pride while on the course,” says Cabell Fooshe, Vice President of Tin Cup. “Based on our outstanding track record in this market, we anticipate these Tin Cups will be in high demand for holidays, tournaments, corporate outings, wedding parties and other events.”

Since being named “Best New Product” at the 2010 PGA Merchandise Show, the company has grown rapidly. Its personalization process takes just seconds, as players simply place the stencil over a ball and trace the template using an ultra fine point permanent Sharpie.

The ever-expanding Tin Cup collection now features more than 90 designs, including a wide range of emblems from all four major military branches and visualization/game improvement marks. Complementing popular styles like Luck of the Irish, Five O’Clock Somewhere and Jolly Roger, new products are introduced each month. An affordable customization program used by well-known corporations, charities, media outlets, celebrities and many others is also available.