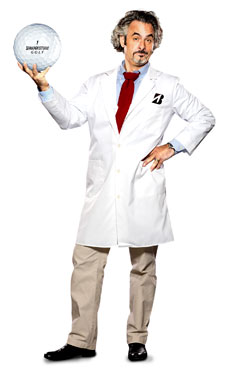 ORLANDO, Fla. (Jan. 26, 2016) – Emmy-nominated television host and one of golf’s most animated personalities, David Feherty, will make his live tournament debut as part of Golf Channel and NBC’s broadcast team at the Waste Management Phoenix Open, Thursday-Sunday, Feb. 4-7. Feherty is joining NBC Sports Group exclusively in 2016, bringing nearly 20 years of experience as an on-course reporter at CBS following his retirement from professional golf in 1996.

“Feherty is a smart, funny wild card whose cult

Fittingly, Feherty’s live tournament debut coincides with the most raucous environment on the PGA TOUR schedule, featuring a crowd of more than 15,000 surrounding the enclosed par-3 16th hole at TPC Scottsdale’s Stadium Course. Feherty will join Rich Lerner in the 18th tower as lead analyst for Golf Channel’s first and second round coverage Thursday-Friday. On the weekend, he’ll transition to his familiar on-course reporter role during Saturday-Sunday afternoon coverage on NBC, with Dan Hicks and Johnny Miller moving into the 18th tower position.

“After a few months off, my peacock feathers are finally starting to come in and I’m ready to join my new NBC colleagues to kick off a spectacular year ahead with The Open coming to NBC, golf’s return to the Olympics, and my personal favorite, the Ryder Cup, this fall on U.S. soil,” said David Feherty. “Forget the training wheels, I feel like I’m a gerbil being tossed to the lions in the Colosseum at TPC Scottsdale. I’m counting on Johnny [Miller] and [Roger] Maltbie to stick up for me should I encounter any chance skirmishes with those lunatic fans throughout the week.”

“David’s one-of-a-kind charm and his innate ability to cleverly access any situation – whether on the golf course or in the interview chair – is his greatest strength,” said Mike McCarley, president of Golf Channel. “And in welcoming him to our tournament broadcast team in 2016, viewers will revel in his candor on some of the game’s biggest stages, at THE PLAYERS, the Open Championship, Olympics, FedExCup Playoffs and Ryder Cup.”

“FLORIDA SWING,” WGC-DELL MATCH PLAY: Feherty also is scheduled to join the broadcast team on Golf Channel and NBC for a stretch of five consecutive weeks, including each of the “Florida Swing” events: The Honda Classic (Feb. 25-28) in Palm Beach Gardens; WGC-Cadillac Championship (March 3-6) in Miami; Valspar Championship (March 10-13) outside of Tampa; and the Arnold Palmer Invitational presented by MasterCard (March 17-20) in Orlando; as well as the WGC-Dell Match Play (March 23-27) in Austin, Texas.

“Feherty is the last unscripted man on TV.” – Men’s Journal

CRITICALLY ACCLAIMED FEHERTY: Season six of FehertySM will premiere on Monday, March 7 at 9 p.m. ET on Golf Channel, with this season’s guest lineup headlined by former President George H.W. Bush, World No. 1 ranked golfer Jordan Spieth, and legendary play-by-play voice Bob Uecker, coined “Mr. Baseball,” by Johnny Carson, after making more than 100 guest appearances alongside Carson on The Tonight Show. The award-winning self-titled talk show –which helped propel him to a 2014 Emmy Award nomination for Outstanding Sports Host – stages Feherty in a one-on-one interview setting with some of the biggest names in golf, sports, entertainment, politics and business. Feherty originally debuted in June 2011 as the most-watched original series in Golf Channel history.

“David Feherty is a true original capable of greatness… if

Described as “a cross between Oprah Winfrey and Johnny Carson” by The New York Times, and as “golf’s wisecracking, maverick interviewer” by Esquire, Feherty has made a name for himself not only through his self-titled Golf Channel talk show, but as one of the most irrepressible personalities calling golf over the past two decades. A native of Northern Ireland and a former professional golfer who claimed 10 worldwide victories and a spot on the 1991 European Ryder Cup Team, Feherty is now a proud American citizen who has risen above a history of alcoholism and addiction to become an Emmy-nominated television host, New York Times best-selling author and comedic relief for thousands of men and women in uniform.