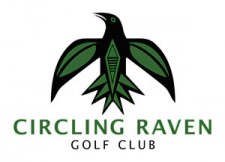 (WORLEY, ID) – Circling Raven Golf Club – an amenity of the Coeur d’Alene Casino Resort Hotel, located a short drive from Spokane International Airport – was ranked the No. 1 public course in Idaho by GOLF Magazine this week in its biennial state-by-state rankings. Circling Raven was also once again named to the magazine’s prestigious list of the “Top 100 Courses You Can Play” in America.

Circling Raven climbed two spots in the “Top 100 Courses You Can Play” in America list, landing at No. 90 out of roughly 13,500 U.S. public access courses. The GOLF Magazine rankings are available online and will be featured in the September 2012 print edition of the magazine.

Owned and operated by the Coeur d’Alene Tribe and designed by course architect Gene Bates, Circling Raven has collected more than 45 “Best-Of” rankings since its first full season in 2004, including being named the No. 1 course in Idaho by Golfweek and ranked on Golf Digest’s “America’s 100 Greatest Public Courses” list. Circling Raven and Director of Golf Tom Davidson were also honored as PGA National Merchandiser of the Year in the Resorts Category in 2010.

Golfers can play the award-winning course this season, with stay-and-play packages starting at $199 for two people.  Details, availability and upgrade options can be found at cdcasino.com.

About Circling Raven Golf Club and Coeur d’Alene Casino Resort & Hotel
Owned and operated by the Coeur d’Alene Tribe and convenient to Spokane (WA) airport, the casino resort and golf club are nestled on a reservation covering 345,000 acres of mountains, lakes, old-growth forest and farmland.

The resort spans the western edge of the northern Rocky Mountains. Tribal history tells us that Circling Raven was a spiritually powerful leader, his name coming from his close relationship to the raven, who helped guide him on his journeys, warn him of danger and show him where to find fish and game.

The newly expanded Coeur d’Alene Casino offers 1,800 machines for play in smoking and non-smoking areas, off-track betting for horse and dog races, high-stakes bingo, entertainment and many other amenities. It is open 24 hours a day, seven days a week every day of the year. The resort is regularly voted the most popular casino in the Inland Northwest.

Both locker rooms include showers and lockers. The practice facility covers 25 acres; separated into areas for wedges, sand play and all clubs in the bag. The Stensgar Pavilion adjacent to the course is a full service event venue, used for golf, business, wedding and other events.

To book tee times 24 hours a day call 1-800-523-2464. All rates include 18 holes of golf, cart, GPS, and use of 25-acre practice facility. For complete price and playing options visit www.circlingraven.com.