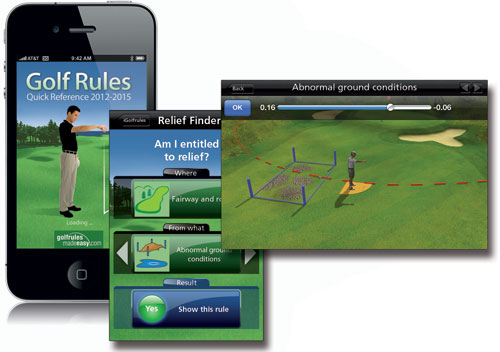 The “Golf Rules Quick Reference” app (formerly called “iGolfrules”) was launched three years ago and since then it has topped the rankings of the most popular golf apps in numerous countries. It is even officially recommended by Apple.

The developers, led by referee and best-selling author Yves C. Ton-That (his “Golf Rules Quick Reference” pocket book sold more than 1 million copies), have now improved the app significantly once again. Updated to include the new golf rules, the app provides the answer to virtually every question about the rules straight away. Razor-sharp, interactive image sequences are used to explain the correct procedure step-by-step. As a new feature, elaborately animated video sequences have been added in order to make the rules even easier to understand. One extremely practical component is the interactive “Relief Finder” help tool that tells you instantly whether you are entitled to a free drop.

The app is so simple to operate that even technically inexperienced users can benefit from all the advantages straight away. You can find the answers to your questions with a maximum of just 3 clicks. Furthermore, a brief summary provides an overview of all the rule changes that came into effect on 01.01.2012. To sum it up, the app is a real must for golfers with a smartphone.

Can be purchased now for the iPhone from the iTunes App Store for $9.99. It will also soon be available for Android and Windows phones.

More information can be found at www.iGolfrules.com