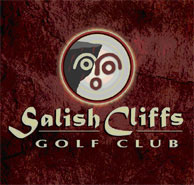 (SHELTON, WA) – The brand-new Salish Cliffs Golf Club at Little Creek Casino Resort – located a short drive from Olympia and Seattle – is the nation’s top course to open in 2011, and No. 8 overall, according to “Golfweek’s Best 2011: Best New Courses” ranking, released today.

Salish Cliffs, a Gene Bates design that opened to the public on Sept. 16, was chosen by Golfweek’s nationwide team of course raters. The elite ranking is reserved for courses that debuted in 2010 or 2011. Not only was Salish Cliffs the top-ranked layout to open this year, but it was just one of two Pacific Northwest courses on the list, along with Old Macdonald in Bandon, Ore., which earned the No. 1 spot. The ranking can be viewed online and in Golfweek’s Oct. 28 issue.

“We have known all along Salish Cliffs is a special course, one we hope golfers will rate among North America’s finest,” said Head Professional David Kass, PGA. “It’s a great honor that, less than six weeks after opening to the public, we’ve already received national recognition from Golfweek.”

Salish Cliffs has received national acclaim for its stunning beauty and clever design since opening. It has also received praise for its reasonable rates and was included on Forbes.com’s list of the “12 Best Value Courses in the U.S.”