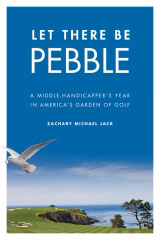 “There’s plenty to satisfy, entertain and prod most golfers to want to read this one on Pebble. . . . An absolute winner!”—Bob Koczor, Golf Today

It was “scary,” Jack Nicklaus said of Pebble Beach, which gave him nightmares so acute he famously woke his wife on the eve of his 1972 U.S. Open victory totally spooked. “It’s not a golf course,” sportswriter Jim Murray wrote, “it’s a hellship.” Golf writer Dan Jenkins once joked that the famed venue of the Bing Crosby National Pro-Am should be dubbed “Double Bogey-by-the-Sea.”

A one-time failed Division One golf walk-on, Zachary Michael Jack opts to stare down an early midlife crisis by chronicling a U.S. Open year spent at Pebble, object of his ailing father’s fantasies and site of the nation’s number one public course and its fairy-tale host town, Carmel-by-the-Sea, California. There along the blue Pacific, he traces the colorful, capricious, and comical world of golf on the Monterey Peninsula as never before via interviews with legends of the game Johnny Miller, Gary Player, and Tom Watson; with today’s brightest stars—Padraig Harrington, Phil Mickelson, and Bubba Watson; and with some of its most famous celebrity linksters—actor Bill Murray, Olympic soccer star Brandi Chastain, and billionaire entrepreneur Charles Schwab.

“Let There Be Pebble is a book for sports fans and lovers of great writing. Faraway fairways and magical greens, history and thrills, hilarity and woe… Zachary Michael Jack’s year next to California’s fabled Pebble Beach offers not just a reading of the greens, but a rediscovery of the self.”—Steve Friedman, author of The Agony of Victory

Conducting more than one hundred interviews, Jack ranges far and wide to get the scoop, talking golfing haunts with the bestselling golf novelist, Michael Murphy; teeing up with members of a Carmel-based worldwide golfing society devoted to mystical play; learning to play Pebble at the knee of one of the Top 50 Teachers in America and with a Carmel-based journeyman pro described as “a golf savant”; and raising a cup with a lifelong Pebble Beach resident and caddy who, unbeknownst to the hackers he shepherds, is a hall of fame golfer. By turns hilarious, haunting, and historic, Let There Be Pebble reveals the utter uniqueness—the people, the rich history, the unforgettable setting and sporting culture—of this one-of-a-kind golfing cathedral.

“If David Sedaris, Studs Terkel, and George Plimpton got together to write a book about golf they might come up with something as enticing and magical as Let There Be Pebble.” —Rus Bradburd, author of Forty Minutes of Hell: the Extraordinary Life of Nolan Richardson

About the Author:
A golf writer and former newspaper sports editor, Zachary Michael Jack has authored or edited more than a dozen books, including the anthology Inside the Ropes: Sportswriters Get Their Game On, available in a Bison Books edition. He teaches literary sportswriting and seminars in sports studies as an associate professor of English at North Central College in Naperville, Illinois.